When Bruce Polvi started his Radio Shack franchise in 1990, the internet was barely born and televisions were the size and weight of refrigerators. Today, as Amazon prepares to roll out drone delivery, Radio Shack is a name of a bygone era. For Bruce, it was the start to a successful business that has grown and adapted with help from the SBDC.

After starting in an 800-square-foot retail space, Bruce saw an opportunity to develop a former lumber mill site, turning a closed industrial space into prime retail real estate with help from the SBDC. By successfully developing real estate to meet the needs of the local business community while running the electronics business, Bruce has adapted with technology and market shifts.

Throughout this time, the SBDC has been there for support. After getting help starting the business in 1990, Bruce returned to the SBDC in 1996 and enrolled in the Small Business Management program, graduating in 1998. He continues to take SBDC classes.

“The SBDC is like a tuneup,” Bruce said. “The evening classes are great for retailers, and they help you see the big picture. I have three degrees from universities, and I view the SBDC as my fourth degree. It is that valuable. It helps you keep in mind all aspects of your business.”

Peter Robertson had worked for a septic service company in Lincoln City before deciding to start his own business in the industry.

In May 2014, Robertson and his fiancé, Jana Grahn, went to the SBDC, where an adviser helped them write a business plan for Northwest Septic Service. They met with their adviser several times, making sure every detail was in the plan.

“He made us think about things we weren’t thinking about at that moment, like how to budget for a website,” Jana said.

The couple then went to Oregon Coast Bank to present their plan.

“They loved it,” Peter said.

One year after approaching the SBDC, they received a loan from the bank, as well as funding from the Oregon Cascades West Council of Governments. Peter and Jana purchased a pump truck and have been busy ever since.

“I truly don’t think we would have been able to do it without SBDC,” Peter said.

Northwest Septic Service, which serves the central Oregon coast, does septic pumping, as well as maintenance and repair services on septic systems.

The SBDC still contacts them every few months to see how they’re doing, Jana said.

As a forest service firefighter nearing retirement, Mike Gatens decided to start a wholesale bait business in Waldport to supply fisherman with shrimp.

Mike and his employees harvest shrimp out of the bays. They then sell the shrimp to bait companies, such as D&G Bait Inc.

To get his business going, Mike took the SBDC’s Small Business Management course. The class helped him understand business taxes, loans and marketing, he said. Mike continues to take monthly SBDC courses and implements what he learns into his business.

Mike said one of his goals was to create jobs in his small community, especially for young people. Seeing his business grow and provide employment for others has been rewarding.

He is looking to open a retail bait shop in addition to his wholesale business. It’s the SBDC that has instilled in him the confidence to pursue new business ideas, he said.

Sean Edmunds is the fourth generation in his family to smoke and filet wild Chinook salmon for Barnacle Bill’s Seafood Market in Lincoln City.

Sean’s parents own the market, which sells fresh seafood caught in the Newport area. Barnacle Bill’s has its own fishing vessel, which the market uses to catch salmon, crab, albacore tuna, halibut and more.

Sean went to SBDC in 2013 for help starting a wholesale side of the business. He worked with Craig Grant, an adviser, to write a business plan and acquire a loan. They talked about how to strategize for future production and demand.

“It’s a big undertaking,” Sean said. “We had a lot of ideas and he walked us through how to evaluate the best ones.”

The business built a large processing facility and, in 2014, got its wholesale license. Now, Barnacle Bill’s sells its renowned smoked salmon in stores throughout Oregon.

“If you just need to bounce an idea off of someone who’s been in the industry and has experience in the area of what you want to do, it’s just good to go talk with (the SBDC) and see if they can help make it more simple,” Sean said. 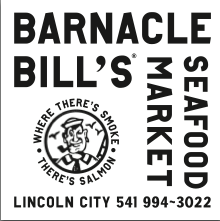 For this kite business, finding the right help was a breeze

After learning about kite flying from the shop’s previous owners, managers Mike and Jackie Oswald purchased Northwest Winds Kites and Toys in Lincoln City in 2017.

The couple looked to the SBDC and center director Dave Price to learn how to run the business and where to acquire financing.

“They made the whole transition much smoother,” Jackie said. “When we didn’t know the next step to take, we would talk to Dave and he would guide us in the right direction on what to do next.”

The Oregon Coast SBDC helped the Oswalds apply for and receive money from the Cascade West Council of Governments and the Lincoln County Revolving Loan Fund managed by the COG.

The owners also have attended SBDC classes on QuickBooks and social media marketing. Jackie and Mike are now seeking out the SBDC’s help in updating the store’s website.

Northwest Winds Kites markets a large variety of products, from kids’ kites to advanced kites, as well as ground spinners and wind socks. Gomberg Kite Productions, which is based in Lincoln County, makes most of the kites the shop sells.